Rebel Bulldog: The Story of One Family, Two States, and the Civil War 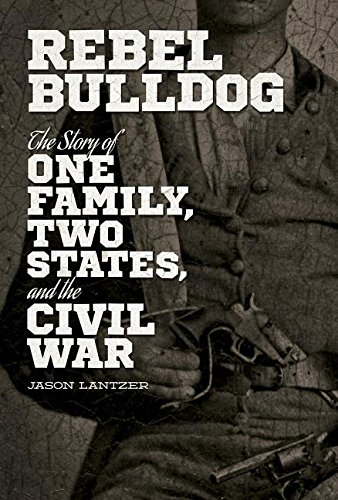 Rebel Bulldog tells the story of Preston Davidson, a Northerner who fought for the Confederacy, and his family who lived in Indiana and Virginia. It is a story that examines antebellum religion, education, reform, and politics, and how they affected the identity of not just one young man, but of a nation caught up in a civil war. Furthermore, it discusses how a native-born Hoosier reached the decision to fight for the South, while detailing a unique war experience and the postwar life of a proud Rebel who returned to the North after the guns fell silent and tried to remake his life in a very different state and nation than the ones he had left in 1860.

The book uses not just Preston s story, but that of his family as a lens to help us glimpse the past. Preston s paternal family had strong ties to the Shenandoah Valley of Virginia, his grandfather was a prominent Presbyterian minister, and family members studied at and helped to lead Lexington, Virginia s Washington College (now Washington and Lee University). The maternal side of Preston s family tree included some of the most important Whig politicians in Indiana s young history, including his other grandfather, Governor Noah Noble. Preston s parents helped found Indianapolis s Second Presbyterian Church, and were married by the congregation s newly named minister, Henry Ward Beecher. It was through these connections that Preston and his siblings met Beecher s sister, Harriet, as well as interacted with an elderly former slave of their great grandfather Noble (whom the governor had brought to Indiana to freedom), a man known around Indianapolis as Uncle Tom.

Committed to faith, education, and community, Preston and his elder brother, Dorman, were enrolled by their father in Ovid Butler s North Western Christian University as part of the second entering class (1856 57). However, with rising sectional tensions, the boys father, Alexander Davidson (himself to be leader in the Constitutional Union Party), decided that both of his sons also needed to spend time in Southern schools of higher education. Dorman attended the Virginia Military Institute, only to come home in the wake of John Brown s raid on Harpers Ferry. Preston, undaunted by the prospect of war, went to his father s alma mater, Washington College. He was there to witness the election of 1860, Virginia s secession, and, despite his father s protests, it was there that Preston enlisted alongside his cousins in the cause of the Confederacy.

Preston served for the duration of the conflict, rising from the rank of private to lieutenant, surviving multiple wounding, the deaths of friends and family members, and the accusation (which helped lead to his eventual court martial) that despite his service he was not really loyal to the South. After the war, he returned to Indianapolis, where he reencountered the family he had left behind (including Dorman, who served briefly in the midst of John Hunt Morgan s raid) and sought to make sense of the new America, one without slavery, that was rising out of the ashes of war.

Davidson s story is one that delves into the human experience on multiple levels, asks us to reconsider what we think we know of the Civil War, and complicates, while it complements the existing literature. It is a story that perhaps could only have happened in Indiana.