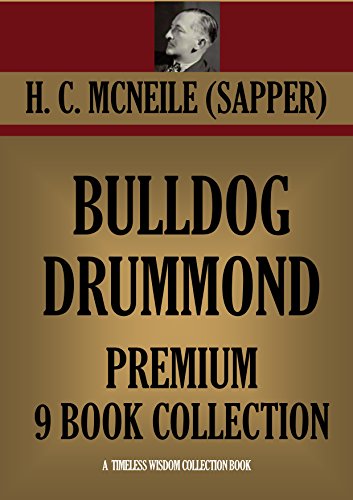 This volume contains 9 amazing novels by Sapper (H.C.McNeile), the prolific English writter, and one of the most successful British popular authors of the inter-war period. His best known character is ex-British Army Captain Hugh “Bulldog” Drummond, DSO, MC, a wealthy former World War I officer of the Loamshire Regiment.

His adventures -which extended through the ten books of this collection-, start after he places an advertisement in The Times stating his desire for an adventure.

Throughout his novels Drummond is captured several times, and manages to escape several times, before eventually defeating the bad guys with the aid of ex-army friends.

The novels are as follows:

Best Bulldog Toys
House Training A Bully Mix
How to Potty Train a Bulldog
Is A Bulldog Right For Active People?
Nutritional Supplements for a Bully Mix
Do Bulldogs Snore?
Do Bulldogs Make Good Watchdogs?
Why do bully mix and bull dogs cost so much?
Do Bulldogs Get along With Cats & Other Pets?
Are Bulldogs Good With Kids?
How Long Will a Bulldog Live? Bulldog History
Bully Breed & Bulldog Health
About Bully Mix Dogs & Bull Dogs
Books on Bulldogs
Bulldog Food & Health