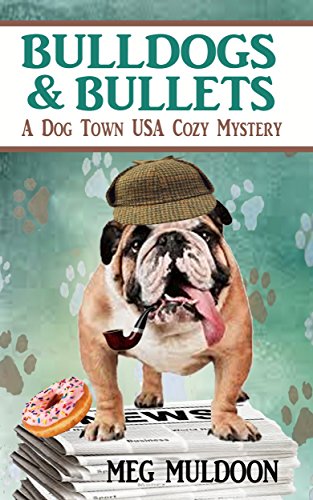 School teacher Mindy Monahan is missing.
And the single witness who saw what happened only speaks canine…

Ace reporter Winifred “Freddie” Wolf is in the dog house.
After turning down the crime beat at her small town Oregon newspaper because of a conflict of interest, Freddie’s editor at The Dog Mountain Chronicle demotes her back down to the dog beat. Which means covering more boring pooch parades, pet profiles, and canine puff pieces than any serious reporter could handle without losing her doggone mind.
But when Freddie’s friend Mindy Monahan goes missing just hours before the local school teacher was due to expose a ring of law-breaking dog owners, the journalist decides she won’t heel and stay within the lines of her beat.
With the help of her police lieutenant boyfriend and her puppy, Mugs, Freddie launches her own investigation into Mindy’s mysterious disappearance. But little does Freddie know that by trying to sniff out the mystery, she’s walking right into a deadly trap.
Because it’s a dog-eat-dog world out there. And Freddie Wolf is about to learn that lesson the hard way…

Bulldogs & Bullets is the second book in the Dog Town USA Cozy Mystery series, and is preceded by Mutts & Murder.

Best Bulldog Toys
House Training A Bully Mix
How to Potty Train a Bulldog
Is A Bulldog Right For Active People?
Nutritional Supplements for a Bully Mix
Do Bulldogs Snore?
Do Bulldogs Make Good Watchdogs?
Why do bully mix and bull dogs cost so much?
Do Bulldogs Get along With Cats & Other Pets?
Are Bulldogs Good With Kids?
How Long Will a Bulldog Live? Bulldog History
Bully Breed & Bulldog Health
About Bully Mix Dogs & Bull Dogs
Books on Bulldogs
Bulldog Food & Health